PLEASE NOTE: An important change took place on January 1, 2021 regarding currencies. Cuba has put an end to its dual currency system (CUC and CUP). This long-anticipated unification leads to the definitive removal of the CUC (Cuban convertible peso) in favor of the CUP (Cuban Peso). More information below.

Cuban Pesos & Where to exchange money

Since January 1, 2021, there is now only one legal currency in Cuba:

Between 1994 and 2020, Cuba adopted a dual-currency system, both called pesos. One is the Cuban Peso (CUP) and the other is the Cuban Convertible Peso (CUC), the latter was pegged to the US dollar at par (see history of the CUC below). But on December 10, 2020, the Cuban President Miguel Diaz-Canel announced the unification of the two currencies resulting in the abolition of the CUC, starting January 1, 2021.

You can only get Cuban Pesos in Cuba
This currency is not traded internationally, so it cannot be bought in advance outside Cuba.

As of mid-July 2020, the 10% tax on USD in cash has been removed.
It's the only foreign currency that was penalized with this surcharge since 2004.

It’s strictly forbidden to take Cuban Pesos out of Cuba
You must exchange your remaining pesos before leaving the country. Note that airside shops in Cuban airports (departure area past immigration) accept foreign currencies (USD, EUR, CAD) and credit cards.

You can exchange foreign currencies at the following locations: 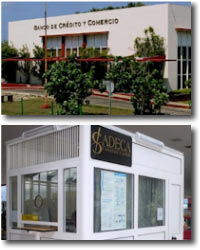 1. Bank
This is where you’ll usually get the best exchange rate. Click for a list of banks located in Varadero.

2. Cadeca  (acronym for Casa de Cambio)
This is the official government's currency exchange house. Exchange rate can be just a little bit higher than the bank, but they usually are more conveniently located. Cadecas can be found everywhere in Varadero: airport, many hotels and resorts, on the streets, shopping centers, etc. However, in our experience, the Cadecas located in Cuban airports is usually the place where you'll get the least favorable exchange rate.

3. Hotels and Resorts Front Desk
Exchanging currency at the Front Desk is the most easy and convenient option but usually not the best rate you will find. Service fees vary from a hotel to another, on average 3% to 6%. Note that in some hotels the money exchange booth located in the lobby may be an official Cadeca, and in other hotels exchange in made at the Front Desk.

Many foreign currencies may be exchanged for Cuban Pesos, such as: CAD, EUR, USD, GBP, CHF, MXP, DKK, NOK, SEK, and JPY, at the daily exchange rate. Note, however, that not all banks, Cadecas or Hotel Receptions can exchange all of these currencies. The "Banco Nacional de Cuba" publishes the official daily exchange rates in its website: www.bc.gob.cu.

The Cuban Pesos have no value outside Cuba. You can exchange back your remaining pesos at the end of your trip but then the exchange rate ("sale") is disadvantageous, so it's better to exchange smaller amounts at the time and budget wisely at the end of your stay.

Travelers Cheques: They can be inconvenient in Cuba because it may be difficult to find a place to cash them and you have to pay a commission (3-4%) and show a photo ID. They are accepted in most banks, major hotels, government-run restaurants, and some tourist-related businesses, but far less readily than credit cards. And note that traveler's checks should not be associated with a US Bank. Plus, traveler's checks used in Cuba are not insured, therefore they lose their primary advantage.

History of the CUC:
The Convertible Peso (CUC) closed currency was first introduced in 1994, but the US Dollar still remained the preferred currency for tourists until November 8, 2004, when the US dollar ceased to be accepted on the island. Since then the CUC became the “tourist currency” to substitute the US Dollar (USD). At first (1994 to early 2005), the CUC was pegged to the USD at 1:1. In April 2005, its value was increase to 1.08 USD, and then in March 2011 the Central Bank of Cuba devaluated the CUC by 8% against all foreign currencies, so this measure now pegs again the CUC at 1 to 1 with the US Dollar.

And later, in October 2013, the Cuban government was announcing its intention to eliminate their dual currency system (CUC and CUP). It was a little over 7 years later, on December 10, 2020, that President Diaz-Canel finally announced the unification of the two currencies resulting in the removal of the CUC (Cuban convertible peso) in favor of the CUP (Cuban peso), starting January 1, 2021.